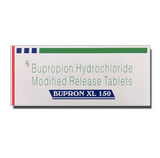 BUPRON XL 150® (Wellbutrin, Zyban, Bupropion, Forfivo, Aplenzin) is a potent medication that is used to treat nicotine dependence, as well as depression and major depressive disorder. As an anti-addictive agent Bupron XL eliminates cravings and desire to smoke, and reduces withdrawal symptoms, such as anxiety and irritability. Buprone XL restores the level of neurotransmitters in the brain and blocks the action of nicotine, thus reducing the addictive effect. As an antidepressant Buprone improves mood, increases interest, reduce depressed mood and feelings of worthlessness and guilt.

GUARANTEE & EXPIRY DATE
100% Original from the Indian Sun Pharmaceuticals. Manufacturer may vary.
All packs are air tight sealed and expire up to 06.2024.
Package photos may vary according to the manufacturer.

DESCRIPTION
Bupron XL 150 - is an atypical antidepressant that contains the active substance - bupropion. Its chemical structure is unrelated to any known antidepressant medications, but its action is similar to the action of selective serotonin reuptake inhibitors. Bupron XL works by blocking the reuptake of noradrenaline and dopamine by the nerve cells, thus increasing their levels in the brain. Bupron XL inhibits the action of nicotine on nicotinic acetylcholine receptor function, resulting in a reduction in the rewarding effects of nicotine.

Dosage: 1 tablet/day in the morning.

The MHRA and FDA has not evaluated or endorsed this product. Please consult your physician prior to using this or any other nutritional supplements or medications.

QUESTIONS?
Ask us any questions about Bupron XL 150.

Bupropion is an NDRI antidepressant, which means it has a different mechanism than SSRIs. I know some people have been prescribed it because of its mild side effect profile who didn't do well on it, but did better on other types, such as SSRIs or SNRIs. Something that's important to consider is how you respond to stimulants, as this is a stimulating medication. For example, adderall completely kills my anxiety, and this stuff does the same for me. For a friend of mine, buproprion increased anxiety. Caffeine is not necessarily the best litmus test for that, as I can handle adderall no problem, but caffeine will give even me anxiety! But if you have a positive response to stimulants like me, this is great stuff. It might not be a fit for everyone, but it's great for those it is a fit for. It's also one of the more affordable medications that can be used (somewhat off-label) to treat ADHD. This site also has Strattera for that, which is stronger but much more expensive. I can definitely say this provided some relief from my ADHD. It wasn't as powerful as adderall, but in some cases that can be a good thing, adderall is about as subtle as a freight train going 100 MPH. The effects of this were more subtle but nonetheless noticeable. It leveled out my moods and silenced my anxiety and intrusive thoughts. I know it won't do that for everyone, but I was very happy with it. For other uses: I did not use this as a stop smoking aid, and have never smoked cigarettes, but I'm an occasional vaper, and while I didn't consider myself addicted to that anyway, the bupropion lessened the effects of the vape so much I no longer had any motivation to do it, and just stopped naturally. It might not be that easy when dealing with an actual addiction, but I can vouch that it did change how my brain reacted to nicotine and made me less interested in it. It made me quit without trying to or intending to. For weight loss, this might be using a sledgehammer to kill a fly, though it's still safer than adderall for that purpose. It didn't kill my appetite as dramatically as adderall or even the OTC ephedrine, though I also was not attempting to diet. I did notice my desire to binge eat went away, and I was able to eat in a healthier way, but it didn't make me forget food exists like amphetamine and similar would. I would not recommend this as a diet aid because it does too much to other stuff and not enough to appetite, though you may get that as a fringe benefit if you use it for something else. That fringe benefit could also help with the weight gain associated with quitting smoking. As for the quality and shipping, I was pleased with all of it. I haven't tried other brands of bupropion, but I've heard from other users that Sun (that's these guys) is the best of the generics for bupropion, and I had no complaints as to potency. The packaging was discreet, and while the shipping times were certainly no Amazon Prime, it's the best you can expect with this type of service. If you even suspect you might have inattentive type ADHD, I'd say this is worth getting. It's mild enough that it won't mess you up too bad if you're wrong, and if you're right you may see a real positive difference. Inattentive type ADHD is often misdiagnosed as depression, especially in women. I'd also recommend it to anyone who wasn't helped by SSRIs for their depression. As a first-line treatment for depression you're rolling the dice a bit more, but worst case scenario it gives you more anxiety and/or headaches so you stop taking it. This is one of the easiest withdrawals among antidepressants, so if it's not for you it's easy to stop. If it is for you, you'll know.

$21
ARTVIGIL® (Armodafinil) is the more efficient successor to Modafinil. Armodafinil consists of only the active components and is therefore considered to be a more targeted version of Modafinil. It is...
Add to Basket
Add to Basket

$19
TETURAM (Disulfiram) - is a drug that is used for the treatment of chronic alcoholism. The medication does not actually cure but rather contributes to the management process of medical treatment. It...
Add to Basket
Add to Basket