MemoProve® is a unique proprietary blend of N-PEP 12 neuropeptides designed to improve cognitive function. Effectivness confirmed by preclinical studies, as well as the results of placebo-controlled studies in groups of volunteers.

A mixture of neuropeptides is obtained by enzymatic hydrolysis of purified nerve cell proteins in compliance with all GMP standards using technologies approved by representatives of the European healthcare system.

MemoProve's® mechanism of action are implemented in two main directions:

These mechanisms make it possible to reduce and prevent the general damaging effect of various factors on nerve cells and its consequences in the form of cognitive decline - impairment of memorization processes and the ability to long-term concentration of attention.

Results of evaluating the effectiveness of MemoProve®

The ability MemoProve® neuropeptides to stimulate the formation of new neural connections is clearly shown in the study of the state of the brain tissue of laboratory animals, divided into a group that received a mixture of neuropeptides and a group that received placebo. Subsequent histological examination showed a marked increase in the density of synaptic contacts in the hippocampus in the N-PEP-12 group compared to the placebo group. The results are shown in the graph below. 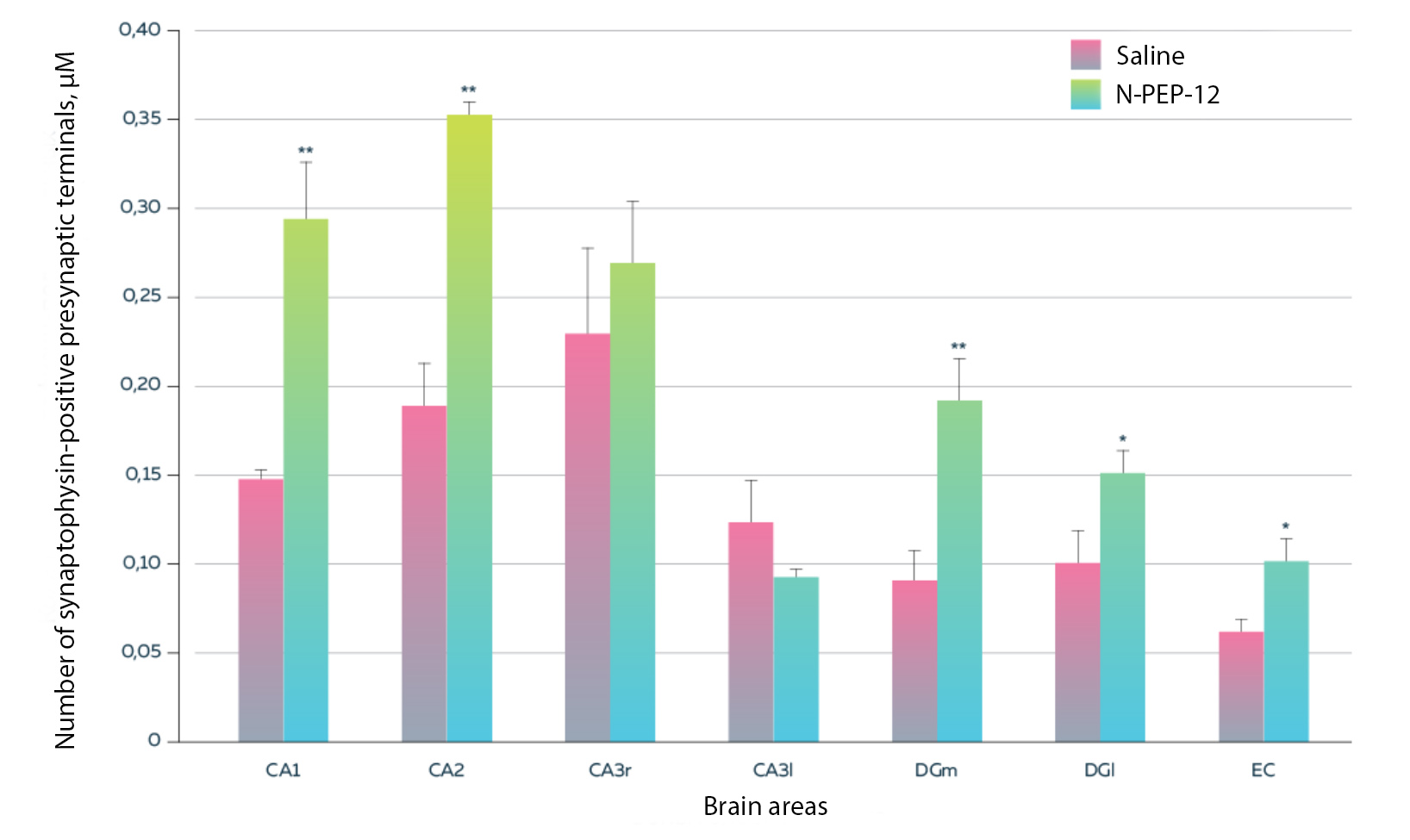 Histological examination of the density of synapses. The number of synaptophysin-positive presynaptic terminals in animals in the groups treated with saline (n = 4) or N-PEP-12 (n = 6), presented as mean + SEM.

Increases in synaptic density and plasticity can cause long-term beneficial effects and, potentially, can slow cognitive decline with age or reduce the risk of memory decline.

According to statistics, more than 40% of people over 65 have mild memory impairment - the so-called "age-associated memory impairment" 1. However, complaints of problems with memorization may first appear in a person as early as 35-45 years old. Studies show that the quality of a person's memory declines by about 50% between the ages of 30 and 702.

Difficulties and tasks of modern therapy of age-related memory disorders

The "age-related" can be attributed to a decrease in the ability to remember, which is felt by the patient himself and is detected using standard tests. The therapeutic possibilities in such cases are limited by the limits of several groups of drugs and their side effects 1,2. Due to the risk of adverse reactions and an insufficiently high safety profile, specialists often avoid prescribing them at the first patient complaints about memory loss. The limited use of available drugs is forcing scientists to look for new means to maintain brain health, based on the features of its structure and physiology. An in-depth study of the features of the functioning of the brain has opened up a new direction of neuroprotective therapy for modern pharmacology - neuropeptides.

Neuropeptides - Scientifically Based Help for the Brain

These compounds are normally widely represented in the regions of the brain responsible for memorization and learning. They form connections with each other and interact with cholinergic, dopaminergic, glutamatergic pathways of information transmission.

The use of neuropeptides in the form of dietary supplements has shown the realization of many of their neurochemical and neurophysiological effects, similar to the action of endogenous growth factors. For example, the peptide complex, which is the main component of MemoProve, has shown in studies the ability to inhibit apoptosis of cortical neurons and to reduce the neurotoxic effects of glutamate 2.

The effectiveness of the active substance of MemoProve has been studied not only on animals, but also on groups of volunteers 2,3. Among all the works presented, a randomized, double-blind, placebo-controlled study, which confirms the efficacy of Memopruv and its high safety profile, stands out. In the work of Crook et al (2005), an objective improvement in the results of tests for assessing memory in the group of subjects who received a complex of neuropeptides for 1 month was demonstrated, compared with the control group. Thus, the group receiving the main active ingredient Memopruv coped significantly better with the tasks for memorizing words and delayed reproduction of words, compared with the placebo group3.

Another study showed the high potential of neuropeptides in protecting nerve cells from damage. Moreover, in the first 24 hours, the protective effect was especially pronounced. After the application of the neuropeptide, after 48 hours from the moment of injury, good indicators of cell viability were also maintained, but the severity of the positive result was already weaker4.

In a study by Crook et al. the number of side effects in the group receiving neuropeptides for a month did not differ significantly from the group receiving placebo3. In another study with the participation of 20 healthy volunteers with an average age of 59.3 years, no significant adverse reactions were also identified 2.

Thus, the high safety profile of Memopruv allows us to recommend it for the correction of memory impairments to people of different age groups, including those with concomitant chronic diseases. Given the clinically proven efficacy in correcting memory and concentration impairments, Memopruv may be one of the means of choice for people with mild (“age-related”) cognitive impairment and memory and attention impairment.