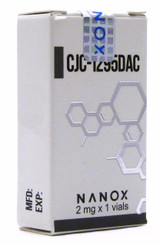 GUARANTEE & EXPIRY DATE
100% Original from the Chinese Nanox.
Manufacturer and product photo may vary.
All packs are air tight sealed and expire up to 10.2023.

DESCRIPTION
CJC-1295 with DAC is a synthetic analogue of a Growth Hormone Secretagogue (GHS) and Growth Hormone-Releasing Hormone (GHRH). It can be classified as the tetra-substituted peptide hormones and contains thirty amino acids. CJC-1295 is an improved formula of GRF (1-29), with a modified half-life.

Although both CJC-1295 (DAC) and CJC-1295 (GRF 1-29) belong to the same peptides class, the later stimulates the body to produce its own growth hormone. It has last longer in the blood than its counterpart as it can last up to two weeks.

According to several clinical studies, the peptide provides the binding of CJC-1295 DAC albumin and plasma proteins that results in an increased effect. Moreover, the effect is also enhanced by the influence of lysine guaranteed with Drug Affinity Complex (DAC).

An improved GRF 1-29 CJC 1295 builds a thirty minutes half-life while CJC-1295 with DAC offers a 6-8 days outcome, which is perfect for two times in weekly doses. Medical studies have shown that within six days after the first injection, the levels of growth hormone plasma increases in 2-10 times.

Similarly, within 9-11 days after the first dose, the concentration of IGF-1 increases in 1.5-3 times. By effectiveness the preparation is equivalent to the sequence of growth hormone of 15 IU per day, proving an actual democratic price.

PACKAGING & DOSAGE
Size of vile - 2mg. The initial dose becomes ineffective by the 5th day and hence one should administer it two times per week to sustain optimal concentration. 1000-2000mcg two times per week is the recommended dosage.

To maintain optimum concentration it is necessary to carry out injections 2 times per week (since by the fifth day it falls to ineffective). The recommended dosage equals 1000-2000mcg, 2 times a week.

Injected into the body fat around the stomach area. Injection Dosage per time: 1000-2000mcg (2 times a week). Mix with 1ml of water for injection or bacteriostatic. 1ml of water into the syringe and inject it into the vial with powder, never shake,  gently rotate the vial between your fingers until all of the powder has dissolved.

SIDE EFFECTS
Negative side effects may include tingling, numbness, decreased insulin, and water retention. Other side effects associated with the use of the peptide CJC 1295 DAC may include itching, tiredness, head rush, and a feeling of lethargy.

The MHRA and FDA has not evaluated or endorsed this product. Please consult your physician prior to using this or any other nutritional supplements or medications.

STORAGE
Should be stored in the at 2-8 degrees Celsius. Do not freeze. Keep away from direct sunlight. Keep locked and away from children.
Before reconstitution with water for injection (WFI) it is recommended to cool the glass vial to room temperature, then enter the required volume of WFI (which should flow down the wall of the vial) and stir with rotating movements (do not shake). The resulting solution remains stable for only 8-10 days in the refrigerator. If using bacteriostatic water, the shelf life is increased to 30 days in the refrigerator. It is better to dissolve CJC-1295 DAC only with bacteriostatic water. The resulting solution must not be frozen.

QUESTIONS?
Ask us any questions about CJC-1295 DAC.

Be the first to review this product.

$41
NEIROMIDIN® (Ipidacrine) belongs to the group of anticholinesterase drugs. In a complex therapy Neuromidin enhances the sedative effect. The drug also has a cholinergic effect which results in...
Add to Basket
Add to Basket

$20
CEFTRIAXONE (Lendacin, Rocephin) - is an antibiotic used for the treatment of a number of bacterial infections. These include middle ear infections, endocarditis, meningitis, pneumonia, bone and...
Add to Basket
Add to Basket
USD