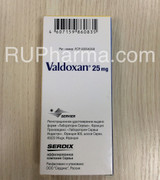 VALDOXAN (Agomelatine, Melitor, Thymanax) is the first melatonergic antidepressant that is used to treat depressions of different origins, to prevent depression returning and to improve sleep patterns. The active component of Valdoxan is agomelatine which stimulates melatonin secretion by acting upon melatonin receptors. Agomelatine also acts as serotonin antagonist which results in the release of norepinephrine and dopamine (it does not affect serotonin levels). Due to its action upon melatonin receptors, agomelatine improves overall sleep quality without daytime sedation. Agomelatine is considered to be well tolerated, has no effect on body weight and sexual function, exhibits no discontinuation syndrome.

GUARANTEE & EXPIRY DATE
100% Original pharmacy product from French Servier.
All packs are air tight sealed and expire up to 01.2024.

DESCRIPTION
Valdoxan is a novel agent with melatonin-agonist and 5HT2c-antagonist activity. As the first antidepressant to be an agonist at melatonergic MT1 and MT2 receptors and an antagonist at serotonergic 5HT2C receptors, it uniquely regulates disturbed circadian rhythms which results in improving of sleep patterns. Acting as serotonin antagonist Valdoxan induces the release of norepinephrine and dopamine - two critical neurotransmitters that regulate areas of the brain that are involved in the control of mood. This is believed to help relieve the symptoms of depression. Further read: https://en.wikipedia.org/wiki/Agomelatine

Valdoxan should be taken orally at bedtime. Recommended daily dose is 25mg. If there are no noticeable improvements the dose may be increased to 50mg/day.

QUESTIONS?
Ask us any questions about Valdoxan.

Changes in product packaging you should take note of

**edited, replace previous pending review if approved This is one of the very few places that I could find that sold Valdoxan online without a prescription. This is quite difficult in the US as it's not FDA approved. If you're here to try it out for yourself, you've probably ran the gauntlet of other FDA approved medications and want to make absolutely sure that 5HT2C antagonists aren't the magic bullet you're unable to access. That includes making sure the product you're getting is the real deal. Well right off the bat, I was skeptical of what arrived in the mail. It got here in about 10 days to CA, making entry into the US through the east coast. I heavily scrutinized the packaging and noticed the following differences compared to the majority of photos available online, including those posted here on Rupharma as of 02/12/2020). 1. The box does not have the Serdix manufacturing logo (Servier's plant in Russia), even though all of the markings and letters are in Russian. 2. The pills do not have a stamped Servier logo. 3. The blister packs have a dimpled pattern as opposed to cross-hatched pattern. 4. The blister packs have "bubbles" over the days of the week, and the right side text is improperly aligned. 5. The expiration and lot numbers are not in the same place. At first, this was quite concerning and I was sure this was as knock-off product. However, I scoured the internet and translated a few Russian websites where customers leave product reviews and often take photos. You can start to see changes around late 2016 / early 2017 where the dimpling pattern is changed and there are raised "bubbles" above the days of the weeks. Then in 2018 the logos are no longer printed and the date stamping changes. And finally in 2019, the dates become more misaligned and the box loses the Serdix branding. I don't know much about the Russian pharmaceutical industry, but it is my understanding that drug prices are fixed by the government, and under more difficult economic times it seems that packaging costs have been cut to stay competitive. Servier has a counterfeit identification service on their website, and for these batch numbers, nothing suspicious caught their eye. Of course, only laboratory product testing can say for sure, but I have high confidence that this product and Rupharma are legitimate, despite the suspicous quality decrease in Servier's Russian packaging.

EUR21
OLANZAPINE® (Zyprexa) is used to treat schizophrenia, bipolar disorder and some related mental diseases. The action of this drug can eliminate hallucinations, agitation, elevate mood and activate...
Add to Basket
Add to Basket

EUR30
This is a sample pack for Valdoxan. VALDOXAN (Agomelatine, Melitor, Thymanax) - is the first melatonergic antidepressant that is used to treat depressions of different origins, to prevent...
Add to Basket
Add to Basket