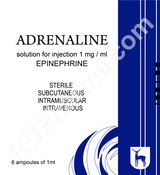 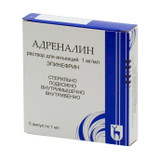 GUARANTEE & EXPIRY DATE
Original from the Russian Moscow Endocrine Plant.
All packs are air tight sealed and expire up to 10.2021.

DESCRIPTION
Epinephrine, more commonly known as adrenaline, is a hormone secreted by the medulla of the adrenal glands.  Strong emotions such as fear or anger cause epinephrine to be released into the bloodstream, which causes an increase in heart rate, muscle strength, blood pressure, and sugar metabolism.  This reaction, known as the “Flight or Fight Response” prepares the body for strenuous activity.  In medicine epinephrine is used chiefly as a stimulant in cardiac arrest, as a vasoconstrictor in shock, and as a bronchodilator and antispasmodic in bronchial asthma.  Epinephrine is found in small amounts in the body and is essential for maintaining cardiovascular homeostasis because of its ability to divert blood to tissues under stress.

During cardiac arrest  the top priority is to maximize the amount of blood flow through the coronary artery.  Epinephrine, when injected into an intravenous fluid solution, will increase the coronary artery pressure thereby promoting increased coronary blood flow.  Increased doses of epinephrine quicken the response, but some studies have shown that brain and heart damage are some of the side effects.

Anaphylactic shock is caused whenever the heart is unable to pump enough blood throughout the body due to an allergic reaction, weakening of the heart muscle, or shrinking of the veins (vasodilation).  Injection of epinephrine into the blood stream will cause an increase of blood flow throughout the body.  The relief is only temporary due to the short half-life of adrenaline; therefore, immediate hospitalization is required to ensure safety to the individual.

Individuals who are prone to asthma attacks have lung passages that are more susceptible to inflammation and swelling.  The swelling causes constriction of the muscles around the airway tubes and an increase in mucus.  The combination of these three leads to the shortness of breath, coughing, or wheezing common to those who suffer from asthma.  When inhaled in small doses, epinephrine causes short-term relief from the symptoms by widening the bronchial tubes allowing air to pass through.  Once again epinephrine is not the best cure, but a temporary relief when an asthma inhaler is not present.

PACKAGING
ADRENALINE comes in the form of ampoules for injection. 5 ampoules per pack.
Active ingredient: Epinephrine hydrochloride - 1 mg/ml, 1ml per ampoule.
Excipients: none.

DOSAGE
You must seek doctor's consultation to determine the optimal dose for your case.
Injected IM, IV or under skin. Depending on the clinical situation, a single dose for adults can range from 0.2 mg to 1 mg. For children - 0.1-0.5mg. Injection solution can be used as eye drops. Locally used to stop bleeding - using tampons moistened with a solution of epinephrine.

QUESTIONS?
Ask us any questions about ADRENALINE.

Be the first to review this product.

USD7
This is a pharmacy grade Oxytocin and not a compound mixture. OXYTOCIN (Oxt, Love Hormone) is the hormone of the mammalian hypothalamus. It is produced by supraoptic and paraventricular...
Add to Basket
Add to Basket

USD22
UNITHIOL (DMPS, Dimercaprol) - has been used in the management of acute and chronic poisoning with a number of different metals and metalloids, and is particularly useful for arsenic, bismuth and...
Add to Basket
Add to Basket

USD11
CERECARD® is an antioxidant that is used to improve metabolism and blood circulation in the brain, microcirculation and blood rheology, to inhibit platelet aggregation. Protects blood cell...